I never had the chance to try Google Glasses while I consulted at Google last year but my friend Judy just got a pair and I tried them this morning. Judy took the following picture of me wearing her glasses: 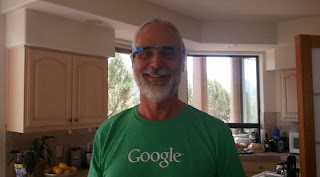 I was pleasantly surprised at how nice they were (after a couple of minutes getting them adjusted). I think that when Google finalizes the product and starts shipping them at a reduced price that the glasses will be popular for a variety of applications like:

I already "talk to my phone" to do web searches, get directions, etc., so talking to the glasses seems natural enough. I think that for general consumers that price point will make or break Google Glasses as a product. For professional applications, price is much less important, but I would bet the Google wants something more than a niche market. One issue I have is that both Android phones and iPhones are already so convenient with the Google Now app and Siri for voice control and getting information that the glasses really need to be inexpensive. It takes me a few seconds to take out my phone and ask Google Now a question - a few seconds saved with the glasses, but I only use Google Now to get information a few times a day so the glasses would not save me very much time.

Long term, wearable mobile devices will probably be very important to Google's business. This is just a guess, but: I expect Google Now (in some form) to eventually become the primary way that users access Google's various services and not only will Google Now be highly adaptable to individuals, but there will likely be different flavors for peoples' individual contexts like what kind of job they have and whether they are at work or at play. The big question I have is what the monetization strategy will be. It is difficult to accept that advertisements will be appreciated by users in voice interactions with mobile devices. It is true that the data Google gets from services like Google Now, on device GPS, etc. obviously helps target advertisements.

The other question I have (and only waiting a few years will answer my question) is: how is Apple going to compete? As a very happy owner of a MacBook Air and an iPad, I love Apple gear, and Google Now services run great on my iPad (and I assume also on iPhones) so Google probably does not care too much if people use iPhones or Android phones to access Google Now services. However it seems to me that Apple is leaving a lot on the table if they only go after the hardware and operating system market. I find using Siri on my iPad a nice experience but Apple does not have the same level of detailed information about me to compete with Google Now. It may be a bit of a stretch but I wouldn't be surprised if Apple ends up owning the market for people who want to maintain more privacy and Google will own the market of people willing to let Google have every bit of information about them in order to make money and provide services. Part of me would rather be in the "privacy consumer market" if Apple steps up and builds an ecosystem that protects people's privacy, and they could do this because they can make money without knowing a lot of personal details about people who use their gear. Google does not have that flexibility.

Popular posts from this blog

February 18, 2020
Here are some of my of my recent notes that might save you some time, or teach you a new trick. I have had good results using the py4cl library if I wrap API calls to TensorFlow or spaCy in a short Python library that calls Python libraries and returns results in simple types like strings and dictionaries. I just committed a complete example (Python library and Common Lisp client code) to the public repo for my book  Loving Common Lisp, or the Savvy Programmer's Secret Weapon that will be added to the next edition of my book. Here is a link to the subdirectory with this new example in my repo: https://github.com/mark-watson/loving-common-lisp/tree/master/src/spacy I frequently make standalone executable programs using SBCL and I just noticed a great tip from  Zach Beane for compressing the size of standalone executables. Start with rebuilding SBCL from source to add the compression option; get the source code and: ./make.sh --with-sb-thread --with-sb-core-compression sh in
Read more

July 08, 2020
My wife Carol and I have been practicing social distancing and wearing masks for shopping for over 5 months now. Welcome to the new normal and a crazy world in which entertaining and seeing friends is done by meeting in people's yards and everyone bringing their own "meal in a bag." I enjoy writing so I have been updating my recent books, starting with Loving Common Lisp, or the Savvy Programmer's Secret Weapon and  A Lisp Programmer Living in Python-Land: The Hy Programming Language . These are free to read online and licensed with Creative Commons Share and Share Alike, No Commercial Reuse, so you can also find copies on the web (hopefully up to date copies!). Last month I started a much larger project: I have not updated my book Practical Artificial Intelligence Programming With Java since the fourth edition was published in 2013. I have discarded a lot of older material like exert systems, and have three new chapters on the semantic web and also a new chapter on
Read more

GANs and other deep learning models for cooking recipes

September 26, 2019
I retired this spring after working on artificial intelligence projects since the 1980s. Freedom from having to work on large projects for other people and companies is liberating and frees up time for thinking about new ideas. Currently I am most interested in deep learning models for generating and evaluating recipes - for now I am using a GAN model (which I am calling RecipeGAN). When I managed a deep learning team at Capital One, I used GANs to synthesize data. During a Saturday morning quiet-time hacking sprint the first month at my new job, I had the idea to take an example program SimpleGAN that generated MINST digits and instead generate numeric spreadsheet data (using the Wisconsin Cancer Data Set that I had previously used in my books as example machine learning data). I was really surprised how well this worked: I could generate fake Wisconsin cancer data, train a classification model on the fake data, and get classification prediction accuracy on real data samples that wa
Read more