Back from Vacation, catching up on work, and a Java retrospective

Carol and I got home from visiting family in Rhode Island late last night and I have been working catching up on customer work since 4am this morning. Here is a picture of my birthday dinner. 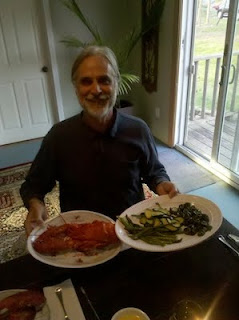 The kids got two pound lobsters for everyone - I am holding mine and a plate of grilled veggies.

Java: I used to do research programming in Common Lisp or Scheme. For ideas that worked I often re-coded them in Java for better deployment options, for better alignment with customer preferences, etc. I fell out of that habit six or seven years ago because I had a long term Common Lisp development job and also really got into Ruby and Clojure development. Both Ruby and Clojure are great for research programming and for some types of applications the deployment options are good.

That said, even Clojure which is efficient (about 1/3 the speed of Java and uses about 3 times the amount of memory) wastes computing resources (hits the environment and the pocketbook). Ruby is much less efficient than Clojure.

I started thinking about efficiency after talking on my flight home to an Intel engineer who was sitting next to me on the plane. He was reading through a book on DSP with tons of differential equations. He said that he used C sometimes but felt better about projects that were mostly done in assembler language because it was a shame to waste processing cycles. We ended up talking about the efficiency of programming languages.

I still believe that it makes sense to prototype systems in whatever language and platform make sense for getting working code in place quickly. The decision is whether to recode for more efficient deployments and if so when to do it.

Posted by Mark Watson, author and consultant at 1:24 PM 1 comment: